E-VOTING: A CURSE OR BLESSING FOR BOTSWANA? 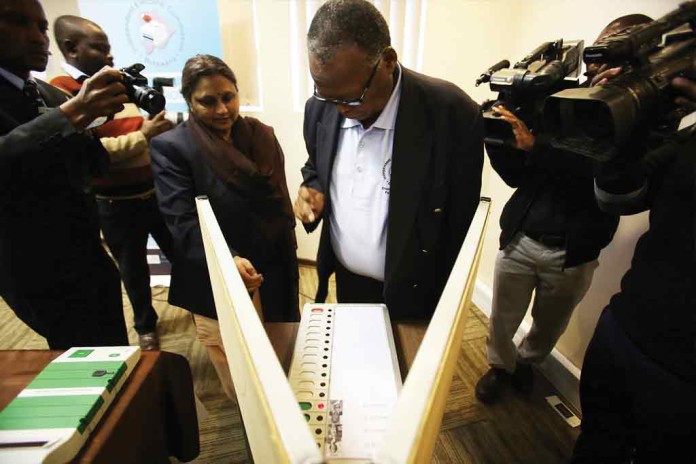 In 20 years, the western world has transformed considerably how billions of people communicate and interact with each other. Since the first emailing system service between 1990 and 1995, to the recent whatsapp short messaging application software and social media platforms. All these advancements have come with tons of new ideas that have either worked against or for,depending on how they are utilised. None of these advancements are developed in the country of Botswana let alone Africa. Being a third world country,this means that most of the advancements that will be viewed as new technologies  in Africa some would have already been phased out in the western world or viewed as old technologies.

The proliferation of technology, has lead to the creation of different systems that make voting “easier” for citizens  or so they say ,under a pseudo name “e-voting”. These systems have been pioneered in western countries that have stringent policies in place to make sure that they are not tempered with. However even with all these policies,continents like the United States have failed to curb incidents of rigging votes. In a 2011 article by MSNBC titled “It only takes $26 to hack a voting machine”  it stated that, “Researchers from the Argonne National Laboratory in Illinois had developed a hack that, for about $26 and an 8th-grade science education, one can remotely manipulate the electronic voting machines used by millions of voters all across the United States. The electronic hacking tool consists of a $1.29 microprocessor and a circuit board that costs about $8. Together with the $15 remote control, this enabled the researchers to modify votes from up to a half-mile away. The whole hack system ran for about $26.”

This in mind and the fact that the first world is said to be ten years ahead of the third world in terms of technological advancements,a red flag for concern can be raised,when stories arise that systems like this will be implemented in the next Botswana general elections in 2019.

In a more recent article published in 2015  by the Christian Science Monitor, it stated  that “Computer security experts have warned for years that some voting machines are vulnerable to attack. In Virginia, the state Board of Elections decided to impose an immediate ban on touchscreen voting machines used in 20 percent of the state’s precincts. When state auditors investigated,they found that,while using their smartphones, they were able to connect to the voting machines’ wireless network, which is used to tally votes. In Another state, investigators easily guessed the system’s passwords. In one case, it was ‘abcde’  and thus able to change the vote counts remotely without detection.”

Bharat Electronics Limited (BEL), an Indian government company under the Ministry of Defence invented and designed the EVM,and was the only company to be present when the tender was put out in Botswana. The machine uses a two-piece system with a balloting unit presenting the voter with a button for each choice connected by a cable to an electronic ballot box. An EVM has two units, control unit and balloting unit; a cable joins the two. The control unit is with the presiding officer or a polling officer and the balloting unit is placed inside the voting booth. Instead of issuing a ballot paper, the electoral officer in charge of the control unit will press the ballot button.

Bangladesh,on May 15 2015 in an article called,Election Commission embarrassed over Electronic Voting Machines – bdnews24.com, stated that,Electronic Voting Machines (EVM) introduced to modernise the polling process have become a source of embarrassment for the Election Commission. The much-hyped machines have remained out of order for nearly two years after the commission stopped using them,having detected errors in three units during city polls between 2011-13. After the malfunction of the EVMs in 2013, the election commission sent them back to the manufacturer with a request to trace the errors last year.The issues have still not been resolved because the manufacturers presented a case  back to the commission that  they used local batteries,hence the malfunction occurred and returned them back to the election commission.The electoral commission’s  attempt to use them again, failed even with foreign batteries.What happens when these machines malfunction in the heat of an electoral period and people’s “e-votes” are  lost? Where will the backups be kept ,that will  have the same information untempered with ? How will information like this be restored?

Secretary of the Independent Electoral Commission (IEC) ,Mr Gabriel Seeletso said,Namibia spent N$61 million,which is approximately P45 Million, purchasing 3,000 machines, then further added that, they expect to spend around P100 Million to purchase the machines. “This will save us a lot of money as we spent P120 Million in paying overtime only after the 2014 elections, but we will be paying the P100 Million just once off,” he said.

For the past five years the public has been bestowed with e-services that are rolled out by government only to be dissapointed a few months into the system being rolled out. The same e-services in other countries that have democratic rule running the countries,these systems work to the aid of the customer,because of careful monitoring and work ethic  the employees may possess.

This then brings me to the question,does the top brass of this country not learn from the past? Do they not see that there are more important things than introducing an e-service systems to vote?,whilst simple systems like the many e-services offered by some government ministries are failing  because of the lack of sound management, and people that do not want to work. How will batswana be reassured that e-voting will benefit them? It would not be far fetched  for conspiracy theorists to assert that this is what the government is trying to put in place just incase votes go against the current ruling party.

This is a fairly new system and one can wonder why a small country like Botswana would need such voting technologies when the population is fairly small. Improvement indeed is imperative in all types of systems used by governments to improve people’s lives, however when they are used  before time, they can prove to be a curse and lead the country in an unfair and undemocratic path. Botswana does not have to turn into a country that fishes its victory off corrupt votes,if indeed that is the plan. “Puso ka batho” a saying in setswana that means, ruling by the people,the citizens of the nation. A government that is answerable to its nations  people,is one that can lead by example. Botswana cannot bare to be marred and cloaked in a greater veil of    corruption and  untrustworthiness,especially in the electoral voting sphere.

In a country where top officials flirt with corruption,systems like e-voting services need to be put under heavy scrutiny and the eyes of bodies that will assure the citizens that no corruption is possible. Then again how will a country that still struggles with giving good day to day services be able to manage an electoral system. Namibia just started using the system two years ago.There is absolutely no reason as to why the government of Botswana should rush into rolling this system yet. Namibia can be an example that the government can learn how to better improve the system and tailor make it for Batswana. At this point the government could be focusing its efforts on making it easier for senior citizens to not leave their homes,they should be allowed to vote from their homes.

Leaders need to think like leaders and represent the reason they have been voted in for. A transition needs to be present,one that has a strategic and developmental crumb trail, that will show the stages Botswana has taken to get to e-voting systems. “Rome wasn’t built in a day”, and a service like this will be a nightmare for Botswana’s electoral processes.

This site uses Akismet to reduce spam. Learn how your comment data is processed.